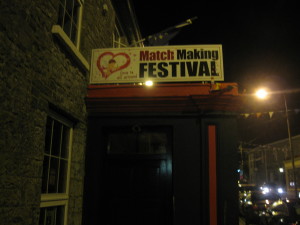 I’ve been working in economic development through arts, culture and tourism in many capacities for more than 10 years now. One theme that comes up over and over and the theme that many of the institutions in SWVA are built around is an Authentic Experience. When we have visitors to the region, are they getting a true and authentic experience? Heartwood, SWVA’s Artisan Gateway has the byline, “Authentic, Distinctive and Alive.”

On one particular evening, Friday, September 27, 2013, on my recent trip to Ireland, my friends and I had that truly authentic experience, and it happened by chance. If I could, I would never plan anything for a trip other than the flight to and from. I would leave all the in-between to chance. Nevertheless, alas, when one is planning for nine people, one needs to have plans.

Our group had a wonderful day visiting the nearby Aran Islands. We returned to the mainland about 5pm and were hungry. Including me, there were three single women on this trip and I had the bright idea of stopping in Lisdoonvarna, only thirty minutes away from the docks at Doolin, to take in the largest Matchmaking Festival in the world.

According to the website http://www.clare.ie/events/view/festivals: “Matchmaking is one of Ireland’s oldest traditions and, for the last couple of hundred years, a good deal of it has taken place in Lisdoonvarna during September and early October……… The town developed into a tourist centre as early as the middle of the 18th-century when a top Limerick surgeon discovered the beneficial effects of its mineral waters. People travelled from near and far to bathe in, and drink, the mineral waters.…………It was due to the popularity of these mineral springs and the huge amount of people going there that led to the Lisdoonvarna “matchmaking tradition”. September became the peak month of the holiday season and with the harvest safely in, bachelor farmers flocked to Lisdoonvarna in search of a wife. By the 1920s, matchmaking was still in vogue and people continued to come and “take the waters”, including many of Ireland’s clergy. It was around this time that one of Lisdoonvarna’s most famous sayings was coined, describing the town as a place “where parish priests pretend to be sober and bank clerks pretend to be drunk”. Today, there is just one official Matchmaker left in County Clare: Mr. Willie Daly who runs the riding centre outside Ennistymon and practices match-making part time. With the exception of the pairings he plans and negotiates, very little genuine matchmaking takes place nowadays. However, Lisdoonvarna’s annual festival has evolved into Europe’s largest single’s event………For the month of September, dances run from noon each day and carry on into the small hours of the next morning………there’s live Irish music in most pubs, although getting to the bar can be quite a task………..” 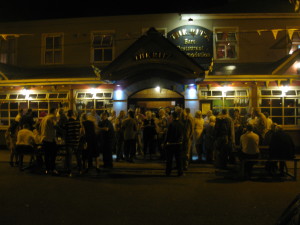 The Match-making crowd spills into the street.

Sculpture in the town square of Lisdoonvarna dedicated to years of Match-making.

We had dinner in one of the quiet pubs and the married people with me indulged me a walk down the street and time for one dance with one Irishman who was gracious enough to teach me the locals’ steps. I didn’t recognize the steps. It certainly wasn’t Irish Step Dancing. Not quite the same beat at a Texas Two Step; slow, slow, quick, quick. Not really a box step either. It was more of a side step, feet together, other side step, feet together. Anyone who knows me, knows I love to dance. In about a minute that gentleman had me backing up and swinging around and around. I felt like we were Fred Astaire and Ginger Rogers. What fun!!!!!!

Now believe it or not, this is not the authentic experience I am talking about. We gathered the troops and headed back to Ballyvaughan. There was a lot of discussion of one car going and one car staying, but in the end we all headed back. It was only about 9pm and I wasn’t a bit sleepy. My jet lag had long gone. When we drove through town, cars were lined half on and half off the sidewalks. We experienced this park-where-you-like in many of the towns whose streets were so narrow there was no room for parking places. They were lined up outside O’Loclainn’s Whiskey Bar, the place I was so attracted to the day before, the same one with the beautiful window boxes full of purple petunias, the one that wasn’t open when we were touring the town. I still hadn’t had an opportunity to taste the much acclaimed Irish whiskey, and this place was about a two minute walk from our B&B. I didn’t have to drive to get there. It didn’t take much persuading to get five more people talked into walking to that pub for a drink.

As we walked up, there were two guys standing outside and one was doing jumping jacks. I thought it a little odd, but let it go. Angela started in the door and turned quickly and said, “Too crowded, we can’t get in.” I’m not one to let a good time slip by so easily. I said, “Wait a minute, let me look.” I walked in and a couple of friendly people spoke and suggested that I try a table in the back. I did, but the empty table was reserved for an elderly couple who couldn’t stand and who had not arrived at that minute. I squeezed my way back to the front attempting to get back outside to my waiting group. The friendly guys wanted to know why I was leaving and I told them I hadn’t had any luck in finding room at the inn. In true Irish hospitality they said, “Wait.” They talked to some of their friends who were sardined on a wall bench and a few short stools and the next thing I knew, they were getting up and giving my group their seats. They were used to squeezing together to enjoy a pint, so they just lined up two-deep along the bar.

We all ordered our libations. The bartender advised me which whiskey to try. Angela tried a Jameson. The bartender gave me Green Spot, a special in Ireland. I asked my friends at the bar what I should chase it with and they said very as-a-matter-of-factly, “Another whiskey.” So I did. Irish whiskey is distilled three times instead of the usual two as in the US. It was so smooth. I didn’t need a chaser and I didn’t need a mixer. It was delicious.

By this time we’re all feeling good and enjoying the mix of people in the pub. I noticed that Mr. Jumping Jack had reappeared at a table near the door. He stood up and used a spoon to ring his glass for attention. The bar got quiet and he started reciting a wonderful poem. I wish I had a recorder with me. Everyone toasted and another person sang an Irish ballad, Acapella. I realized that Mr. Jumping Jack was the emcee for the evening. All through the night, he quieted the crowd and allowed another participant or himself to sing or recite a poem or tell a story. I found out that many of the people in O’Locliann’s that night were part of a walking club and there was a Walking Festival happening the next day. We landed smack dab in the middle of a ceilidh and didn’t know it. If they hadn’t been so friendly and welcoming, we would have walked out and never had that life-long memory. If you haven’t had a chance to experience a ceilidh, they are described as literary entertainment, stories and tales, poems and ballads, songs, conundrums put, proverbs quoted, and many other literary matters discussed. Many years ago, the Carmichaels of Galax and Lynn McClary (one of my travelers) of Grayson County organized ceilidhs at the 1908 Courthouse in Independence. I hope they can be resurrected.
I would have been happy to stay there to the wee hours listening to their craic (Irish word for fun), a truly authentic experience, and a good time was had by all…….