Out of the Gate

Our plane landed in Shannon at 6am.  We gathered our bags and picked up our rental cars.  I rented two cars for the nine of us.  I just didn’t want to even think of renting a van as big as the one I rented in France for a similar group, due the very narrow and winding roads we would be traveling.  Shannon is a small enough airport and easy enough to get acclaimated to the roads in any kind of traffic, and driving on the wrong side of the road.  We ran into a US couple later in the trip who had flown into Dublin and had to negotiate that traffic as well as learning to think absolutely against the grain of everything you’ve ever thought about in driving.

Right out of the gate, we experienced hospitality that I would normally tag as “southern”.  We were in southern Ireland you know and many of our southerners in the US have Scots-Irish heritage.  Maybe it is not too big of a stretch to think our southern hospitality is just part of our DNA from those ancestors.  The people at Hertz upgraded our cars without a fee, just because they could.  We stopped by Bunratty Castle Lodge for a true Irish breakfast buffet and enjoyed a wait-staff as hospitable as could be.  The only thing different in a big American breakfast and a big Irish breakfast was the pudding.  Again, a heritage thing, I think-eggs, sausage, tomatoes, Irish soda bread, bacon etc.  The black and white pudding was a new cultural treat for me. White pudding is a meat dish popular in Ireland. Similar to white pudding, black pudding doesn’t include blood. It consists of pork meat and fat, suet, bread, and oatmeal formed into the shape of a large sausage.  They slice that and fry it up crisp.  Really tasty!  Full and awake and ready to start our trek, about an hour away, to the first B&B in Ballyvaughan…..On the road again…… 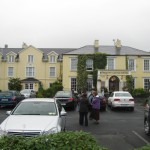 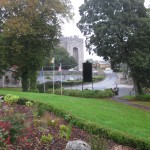 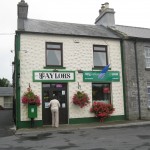 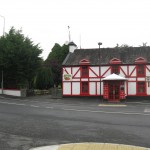 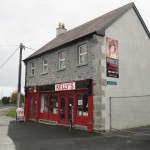 Typical businesses at a small junction. 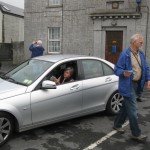 Which road is it?