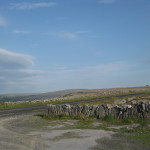 The beginning to the road through the Burren. 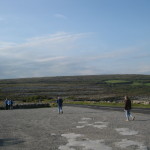 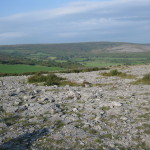 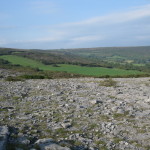 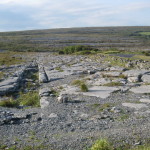 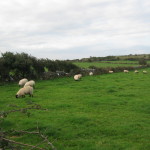 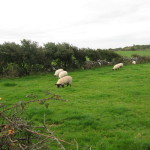 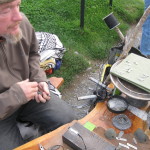 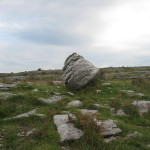 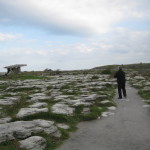 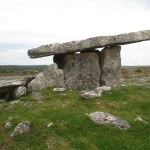 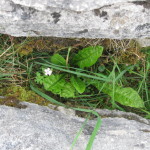 Wildlife in the cracks. 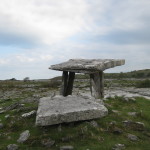 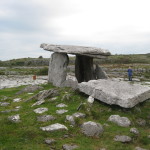 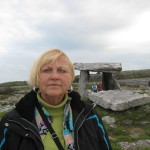 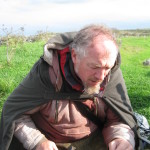 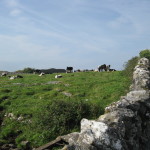 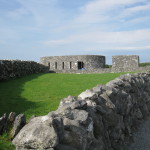 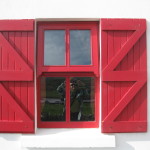 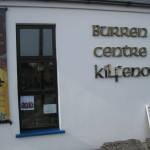 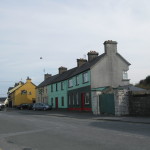 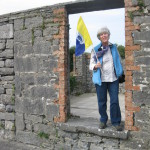 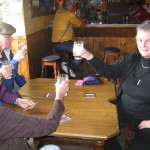 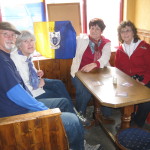 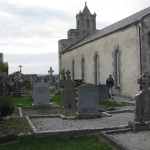 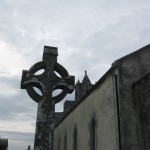 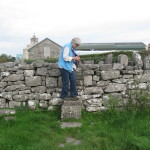 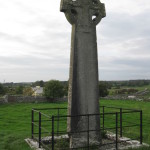 The first Saturday of our visit in Ireland was bitter-sweet. Only three days in the country and we were leaving Ballyvaughan, a village we had all fallen in love with, leaving Kathleen, our inn-keeper who made the best breakfasts and for me leaving behind a strong sense of belonging. I can’t explain how comfortable I was in that part of Ireland. At the same time we were excited. We had a day planned for exploration in The Burren. What’s more we were on our way to Springfield Castle, our home for the remainder of the trip. If we drove straight to Springfield, it may have taken a couple of hours, but this day we wanted to see and experience this big rocky landscape between Ballyvaughan and County Limerick, The Burren.

The Burren, actually means, in Irish, “great rock”, according to Wikipedia. To me it looked like something right out of science fiction or what one may imagine of a moonscape. The Burren covers a big part of northwest County Clare and is one of the largest karst landscapes in Europe and reaches all the way to the Atlantic on the west side. The Burren is full of historical and archaeological sites with megalithic tombs, portal dolmens and ring forts. There is so much myth and folklore there. All the history I was reading about there, reminded me about an article I had just read in Ireland, (the magazine), September/October 2013 edition, “The Celtic Roots of Halloween”.

I had no idea that our Halloween celebrations came from Ireland! When the Irish emigrated here, they brought the traditions with them. Years and years before Christianity was introduced to Ireland, people’s spirituality centered on nature and what we think of as Paganism. Even when Christianity was introduced, there was a slow, peaceful merging of the two faiths. The celebrations of Pagan’s Samhain eventually evolved into Halloween as we know it today, as did many of the Christmas celebrations we have adopted.
October 31 marked the end of the Celtic old year and the beginning of the Celtic New Year, the beginning of the dark of winter days and the end of the light of spring and summer. Just as we dress up for Halloween today, people of that time dressed up to pay tribute to their animal deities or good spirits and to ward off and hide from the evil spirits. This tradition also kept the costumed people’s identities secret.

There were several customs written about in the article, but one of my favorite was about “Stingy Jack”. Stingy Jack was a myth from a northern county in Ireland, a mean spirited farmer who was so stingy that he wouldn’t pay his bar bill. A drunkard and gambler, Stingy Jack invited the Devil for a drink and then tricked him out of that bar bill also by getting the Devil to turn himself into a gold coin. Jack was to pay the bill with the coin. Instead of paying the bill, he hoarded the coin, but years later in a drunken stupor, Jack freed the Devil. Jack died and was not allowed in Heaven or Hell, but was given a turnip with a chunk of burning coal from Hell to light his way, condemned to walk the earth between the living and the dead for eternity. In memory of Jack, the people of Ireland used a carved turnip as a lantern and when they immigrated to the US, they began using pumpkins. Hence the “Jack-o-Lantern”.

We spent the whole day visiting some of the ancient mythical sites and walking in the ring forts, imagining ourselves living those lives and imagining the rituals they carried out. When we stopped at one of the more famous, the Poulnabrone Portal Tomb, we talked at length to a very informative Druid character. He was making metal pendants using Ogham, an early medieval Irish alphabet. I think we all bought one or more. We learned so much from him about the Burren, the Druids, myths and more.

We stopped in Kilfenora and saw a short film at the visitor’s center about the Burren. We were still a good distance from Springfield Castle and daylight was getting away from us. I knew the castle was located in the center of 200 acres and between two small villages. I really wanted to get there before dark to avoid getting too lost. As usual we were hungry. We also had one more factor to deal with. On this day County Clare (where we were at the time) was having a play-off with County Cork (on the edge of where we were headed) for the National Hurling title. I’m not talking about upchucking, but something more like our football’s most famous day of the year, Super Bowl. Everyone was closing their stores and restaurants to go home and watch the event. We found a wonderful pub in the middle of Kilfenora that agreed to feed us before the crowds gathered there in front of their big-screen TV.

After our late lunch we found a grocery store that hadn’t locked their doors. As soon as we left, the door almost hit us in the butts. We bought provisions for the castle and the next morning’s breakfast, wine and cheese for the evening and Irish junk food. Harriet even talked the young man at the counter into selling her a County Clare flag. Both our cars were already flying an Irish flag in order to keep in sight of each other. Harriet agreed not to hang the Clare flag from the window when we entered enemy territory.

We were really catching that Hurling fever. We listened to the game on the car radio on the drive to the castle. Now mind you, we didn’t have a clue of what was happening, but could make out a few important quotes, straining our ears to understand their Irish accents. We had a running debate on who actually won the game, but couldn’t be certain until the next day when we made a pilgrimage to Cork and were caught in the middle of crowd control as the players returned to town.

We didn’t get to the castle before dark, but only got turned around once. Ok, maybe twice, but certainly not three times!!!!

I’m really glad you’re reading my blogs about the trip to Ireland. It is very cathartic for me to write about this. It was a truly inspirational journey and I was too busy to write while we were there. I want to journal about the trip before I forget some of the finer points. I’m also having fun reading about some of the history and culture online now. I can relive the moments and understand more about what I was seeing. I found a wonderful website that explained a great deal about the Burren. Keep reading if you’re interested, but check back here for more on the trip or scroll way down my website for the first few blogs, just in case you need a good tonic to induce sleep.

Facts from http://www.burrenbeo.com/burren:
• The limestone layers that dominate the Burren were laid down 340 million years ago.
• This limestone is composed of skeletal remains of marine organisms that lived in the warm, shallow sea during that distant period.
• They were compressed by their own weight and elevated by plate tectonics or continental drifts to reveal the fossil-rich beds that we see today.
• The darker, impermeable rocks that once covered the entire Burren were removed through glaciation.
• The last Ice Age, began roughly one million years ago when much of the upper layer of the Burren was stripped off and exposed the limestone by erosive glacial waters scouring by the ice.
• Studies in the Burren uplands and the archeology remaining, has allowed an understanding of the evolution of the agricultural society from ‘hunter-gatherer’ origins over six millennia ago to the present day.
• The Burren has been described as one ‘vast memorial to bygone cultures’.
• Wedge tombs of Neolithic origin have been found in the region, from an estimated national total of just over 500.
• Hundreds of ancient cooking sites or fulachta fiadh and ancient cist graves are found throughout the hills.
• About 500 ring forts are found in the Burren. Tower houses and Early Christian church sites are also common.