Newbie at a Ukulele Festival 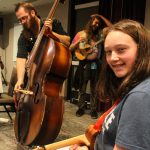 Lacy at the Friday jam.

Considering a recent “back to the past” moment, I am planning two important events.  One, a group trip to see Georgia O’Keeffe’s Ghost Ranch and the Pueblo people’s cave homes and more immediately, an Imperfect Pottery Party. I had a glimpse, a small window into the old me; the me that had so much energy, the me that had creative brain neurons firing almost constantly.  That moment was almost frightening! I didn’t realize what was missing until I saw it again.  It was such a welcome, but a quickly fleeting moment. It’s been three years, less one month, today, since Mitone decided to have a brain aneurism and check out on us.  For the next three days we’re celebrating Dia de los Muertos (Day of the Dead), another attempt at putting one foot in front of the other without losing the good memories. “Day of the Dead is a Mexican holiday celebrated {……..,} by people of Mexican ancestry {…….with } prayer and remembrance of friends and family members who have died.” (Wikipedia)  They have picnics in the graveyards and have the deceased’ favorite foods for those that come back from the dead for a visit. Even though I lost my only sibling this September 11 and my very young cousin a week later, I’m not in the funk I’ve lived through for the last three years.  Believe me!  Lacy and I have stayed remarkably strong and always living in the moment.  Therefore! Please join Lacy and me as we celebrate my crawl-out-of-the-basement and off-the-pottery-wheel.  We’re feeding the “glimpse” moment with a party.  Our house will be open from 10:00am until 8:00pm on Friday, November 24.  Come by and see and/or buy my Imperfect Pottery, paintings that need a new home, and all the dust bunnies.  Most of all, help me have more moments.  All art at rock bottom prices and get the dust bunnies as a gift.  Come by and enjoy the cookies I’m making per Lacy’s request. Bring a musical instrument and help Lacy make the house really merry. I’ll have the details of the Colorado/NM trip ready by then.

What a difference a year makes!

December 1, 2015. One year ago today I got the horrible news that my only daughter died unexpectedly while on a job at The Chocolate Moose, in Stuart Virginia. I hadn't been too enthused to do a lot of writing since then.  However, today I sit on a train bound for NY, NY with my only grandchild, Lacy.   To fly or drive? That was the question. We both love trains. We had plenty of time and it was less expensive to take a train.  No way I would drive.  Just a few of the determining factors.  I want to post a few blogs here about traveling with a ten-year-old. Excuse the messy writing and grammatical errors. I'm using a mini iPad. The train rock and rolls and the ten-year-old breaks my concentration. But that is the fun of traveling with her.  The biggest determination in choosing the train is just because of Lacy. She loves getting up, moving around, unbound by tight seats and restrictions experienced on airlines. She has plenty of time to complete her homework and to see interesting sights. I like it for her because I get to play geography teacher. There's nothing like first hand experience to learn about a region or two. The drive from Hillsville to High Point to catch the 8:17am Carolinian was a breeze because I had the radio on and averted a traffic issue on the I40 Business. I left at 6am.  Lacy took a nap and was ready to see the world by the time we arrived. My timing of one and a half hours was perfect. The small station at High Point if easy to navigate, easy to park and has a very friendly, helpful staff. Watch for more posts to come when we see The Rockettes tomorrow. 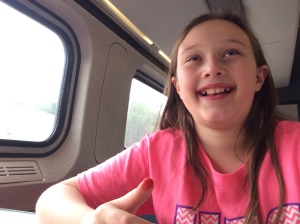 Thanksgiving: No Cell, No Phone, No TV, No Internet! 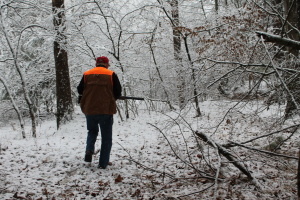 Hunting with my big brother.

Three nights and four days with no TV, no cell phone or landline service and no internet connection might seem inconceivable to many.  It was one of the best Thanksgiving vacations I’ve had in ages! My sister-in-law, Jeannie Lohr (Moseley), purchased a new hunting cabin in the middle of the George Washington National Forest just outside Churchville, Virginia and invited me up for the holiday.    I heard the snow forecast and left on Tuesday arriving in time to sit down with her and my brother, Steve, for a hot chili-bean dinner.  Steve makes the best chili! The snow came as predicted and by Wednesday morning, 5-inches covered the landscape like a white Christmas blanket.  The trees were heavy with snow.  The power blinked on and off like a neon sign, continuously threatening us with even fewer modern conveniences. We all cooked and ate, ate and cooked.  The “cabin” turned out to be a good-sized house with all the amenities (if you don’t count TV).  A big rock fireplace with a fire that burned day and night camouflaged the cold outside.  We warmed our toes often, after what I consider one of the best parts of the affair -- Steve and I went grouse hunting. He hunted with a gun and I with a Canon EOS Rebel T3. We both brought home the game. The snow crunched under our feet and tickled our faces as we tramped each day through the National Forest, only yards from the house and the smell of the wood fire waiting our return. I “hunted” alone for several hours one day, exploring the rigid columns of tall soldiers hiding all but the bravest of our feathered friends.  Yes!  I had on blaze orange.   And yes.  There were hunters as thick as vultures on road kill. The icy roads cleared on Thanksgiving Day and we drove to Elkhorn Lake and to Braley Pond planning my next trip for some trout fishing and to paint a mural with a stream on their wall for the pet raccoon to paddle in. We need to name him.  What do you suggest? 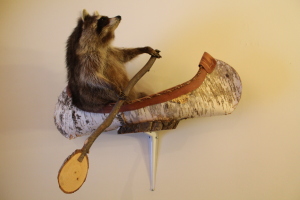 Raccoon in a birch canoe. What's a good name for him?

Steve and Jeannie aren’t accepting renters, short or long term, but if you have an urge to do some hunting and fishing, The Buckhorn Inn at 2487 Hankey Mountain Hwy. Rt.250, Churchville, Virginia looks like a great place to stay. Call innkeepers Garlan & Sylvia Yoder at (540) 337-8660.  I had dinner there many years ago and loved the place. 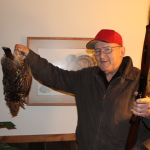 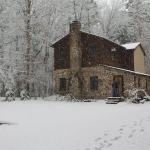 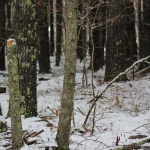 Soldiers standing guard for the birds. 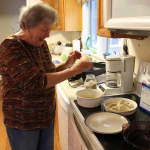 Jeannie in the kitchen. 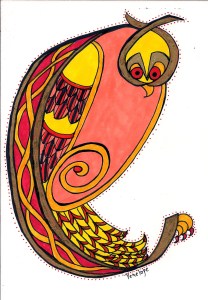 Since my trip to southwestern Ireland in September 2013 and my upcoming trip to Northern Ireland in December 2014, I’ve been intrigued with the Celtic culture. Even more so when I saw firsthand, the Celtic cultures of northwestern Spain this past June. Is it the years that I’ve put on since World History in high school and undergrad work or is it the fact that classical, traditional history classes doesn’t cover a lot about the Celts? I purchased an animated film The Secret of Kells.  It is beautiful!  Celtic art is very curvilinear, with Celtic symbols and designs containing spirals, interlacing patterns, knot work, stylized animal forms and exquisite color.  This film has all that and more. I wanted to know how to spell some of the film character’s names and was curious about making ink from oak berries, as they did in the film.  You gotta love “Google”!  This is a brilliant blog spot that gave me the answers: http://cabinet-of-wonders.blogspot.com/2012/01/secret-of-kells.html   I just emailed off a proposal to the Appalachian Summer Regional Governor’s School for June 2015.  I’ve taught Economic Development through Arts and Culture in Southwest Virginia for the last three summers.  I want to switch it up a little this time.  I have learned so much in doing the research for the class I hope to teach at Wytheville Community College, Art 195-1: Topics in Art, Celtic Life, Myth, and Art: a Lost Civilization.  We’ll draw our inspiration on Ireland’s ancient Tree Lore, Mummers, Ogham, an ancient from of writing, and The Book of Kells, a 5th century CE Irish monks’ decorative manuscripts.  The brightest high school students will earn college credits for these engaging arts projects: Create an Ogham clay pendant, learn Celtic Calligraphy, create their own Kells-type manuscript, research and create a representative mummer character-mask, preform for the class as a mummer using a poem or story from their research.   I am boning up on my knowledge and beginning to prepare a Power Point presentation.  I started early to make the most of my research trip to Ireland in December.   While there, I am interviewing a mummer, I’m going back to Trinity College Library in Dublin to see the Book of Kells and I’m opening my mind and spirit for all Celtic cultural experiences that pass my way.

If you would like your vacation or tourism property covered in a feature story, contact me,
Penelope Moseley
276-733-9704
paw@penelopesart.com